↓
Home » Caramulo – There and Back

This year we once again joined our friend Mario, another Morgan Plus 4 owner, at Caramulo in Portugal for the Caramulo Motorfestival. I competed in the Hill Climb Regularity event, as I did in 2014. This time, however, without a navigator. We were also joined Calum, a Scott, and his red Morgan 3 wheeler that he had driven all the way from Scotland via Switzerland.

Most of the photos below were taken by Alis.

We left home under a decidedly unpleasant sky and with the hood up and wipers beating. By the time we arrived in Southern France it was down with the hood and the last few kilometres to La Farlede was enjoyed in warm sunshine. After a very pleasant evening with our friends Raphael and Odile accompanied us for the first couple of hundred kilometers and had lunch with us at the Golf Club Pont Royal.

Raphael and Peter ready for the off.

Our next stop was a very nice old mansion converted to a hotel at Villeneuve de Riviere within sight of the Pyrenees.

After some fairly heavy rain overnight we departed with the hood up once again.

We arrived at Hotel Verdemar above San Vicente de la Barquera in time to go down and explore the town. It was decidedly cool and cloudy and after an aperitivo near the harbour we returned to take a dip in the pool and enjoy a relax in the steam bath and spa pool. The evening was concluded with an excellent seafood meal.

Nice place but just a glass of wine. Not exactly what we had been expecting.

Back at the hotel the dinner made up for our previous disappointment at the bar near the port.

The next day dawned bright and sunny and we were able to take full advantage of our day in Cantabria.

The view from our hotel room

It was hood down and off to visit the nearby towns of Comillas and Santillana del Mar. Without a doubt the highlight was our visit to El Capricho de Gaudi. The most extraordinary building that really shows the genius of the architect.

Naturally after this we needed to top up energy levels.

The next day we drove on in intermittent rain to top the mountains where we arrived at the hot spa of Caldas de Luna which is embedded in a valley that really is a moonscape.

The next port of call was the Hotel Forte De Sao Francisco Hotel, Chaves, not far over the border into Portugal. On the way we saw the speedo click over 60,000 km. The car has actually done a few more because the speedo was out of action for several hundred kilometres on our last trip to Caramulo in 2014.

We enjoyed a visit to the town followed by one of the best steak dinners that I have ever enjoyed. Definitely to be recommended. According to Alis the shopping was not bad either and I started to worry about the rate at which the spare space in our luggage was filling up.

The red moon from the terrace at the hotel restaurant

I decided that the local pastries were not bad at all.

The view towards our hotel from the top of the tower.

After a couple of deviations (otherwise known as TomTom shortcuts) We arrived at Caramulo.

A trial run up the hill with Calum

Ready for the scrutineers

You came from Scotland in that!

And yes there was a club run for the bikes

Saturday night dinner at the Museum

Sunday morning, nice breakfast, scrambled eggs, bacon and a couple of pasteis di nata (plus a few other things that I don’t recall)

After a bit of a chat we had a look at some of the cars and then went for an (officially) untimed practice run.

In the mean time Alis had found a new friend and naturally they wanted a photo together.

We had been treated to an aerial display on Saturday but on Sunday there was an acrobatic display followed by a flypast of 3 fighters doing circuits over the town.

After lunch we were ready for a competitive run.

You can see the look of concentration as he was out after Duarte’s M3W record. A few more runs and he might have done it too, he was improving about 4 seconds every run 🙂

Yes children, that is a wooden helmet

Below is a video put together by Diogo, Mario’s daughters boyfriend.

Some locals discuss the results.

I never could really understand the sense of burning rubber

Almost over for this year

The group photo: nearly everyone was wearing troosers (including the Scottish women)

Reminds me of a song.

Calum was congratulated on his success in a rather memorable way

I don’t think that the green fireball we saw during our after dinner celebration had anything to do with a certain bottle.

The “Return from Caramulo”.

The first leg of our return trip was from Caramulo to Toledo in Spain.
At Mario’s recommendation we made a small deviation near the Spanish border to visit the town fortress of Almeida. From the air the walls are seen in the form of a star. 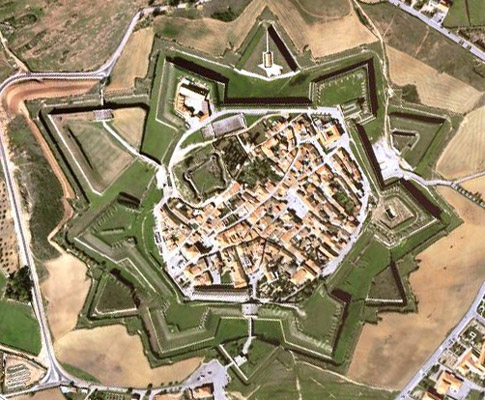 When we arrived it was nearly lunch time and we had hoped to find a bar with something to eat, however the place was near deserted and the best we managed was a cold drink.

Here you see how the fortress dominates the surrounding plain.

One of the entrance gates through the outer wall.

Across the plains of Spain, without rain! You could almost be in Western New South Wales 🙂

Or the Northern Territory

Our hotel in Toledo, Sercotel Pintor El Greco, was quite convenient to explore the old city and right next to the El Greco Museum. That night we explored the old town and enjoyed an excellent meal at a small bar in a back street. The following morning we went to visit the Cathedral. It took us nearly two hours but the fee, which included an audio guide, was well justified. Here are a few photos.

Below is a painting by Caravaggio. It is absolutely astonishing in composition and near photo realism.

The smiling Madonna and Child

Some other Images of Toledo

On the road again

We headed towards Valencia and then skirted the city to head north towards Barcelona. Shortly after crossing into the region of Catalonia we arrived at the fishing village of Les Cases d’Alcenar. Our hotel was a converted house, Cal Naudi, in a quite country zone just back from the coast. It was absolutely delightful and we enjoyed two excellent dinners on the terrace with a view to the coast. Unknown to us when we booked the hotel the area has a certain notoriety. The owner told us that they heard the explosion when the group of terrorists, who were preparing a bomb for the Barcelona attack, blew themselves up.

The area used to be full of Carob trees but an abnormally freezing winter killed many of the trees and the industry never recovered. The surrounding hills are covered in abandoned terraces. A bit sad really.

View of Cal Naudi from the hill behind

The following day we visited a reserve of the Museum Mon Natura Delta de L’Ebre. The delta is a huge rice growing area but was also historically important for salt production and fishing. A tremendous number of birds either live in the delta or use it as a migration staging point.

Salt ponds. The sun on the ponds gradually evaporates the water until only the salt crystals are left.

The delta also includes a large lagoon separated from the sea by a narrow spit of sand. The sea was a little rough and there were actually quite dangerous currents which explained why there were few people in the water despite the warm temperatures. The sea was actually warmer than the water in the pool at the hotel.

Yes that idiot out there is me.

We then returned to a restaurant at the fishing port. Naturally a paella was the obvious choice.

Yes, that is me, discussing the catch with one of the crew.

Our last night in Spain. A moonlight dinner on the terrace.

The next morning we only just made the ferry due to heavy traffic on the outskirts of Barcelona. In fact we were the last car to board, which meant nearly the first off

I will not go into full details of the voyage. The cabin, and in fact the whole ferry lacked a degree of cleanliness. Thank goodness I had opted to book meal vouchers for the restaurant, which was the one thing that was excellent, and not for the self service. The ship was overrun by 350 children and the majority of parents did little or nothing to keep them under control. Apparently the day before the captain had turn off the elevators because the children were using them for amusement. The only refuge was in our dirty cabin. It is the only time I have been on a ferry that has armed security personnel. One of our cabin neighbours had had enough of the children running through the corridors and banging on the doors and at midnight went and found an officer and insisted a security person be placed on our deck. Suffice to say we will never book that route again.

We arrived in Genoa at quite an early hour and by lunchtime we arrived home at Lake Como.

A great thanks goes to Mario for organising the Caramulo end of things and a cheerio to Calum who shared our Caramulo adventure.